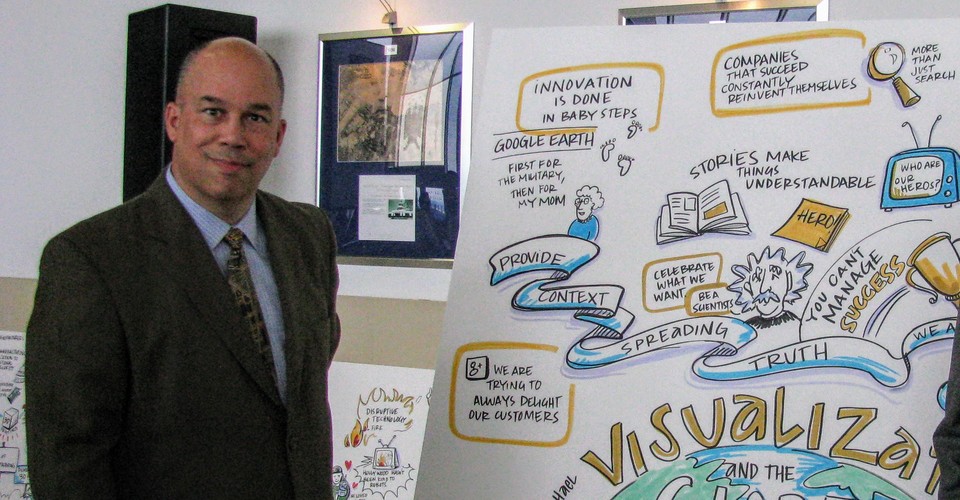 Over the years, I’ve frequently mentioned my friend Michael Jones, a computer scientist and geography whiz. Nine years ago, he was a leading figure in my Atlantic story “Hacked,” the saga of what my wife Deb and I learned when her email account was taken over by international hackers. For an Atlantic column around the same time, I interviewed him on the way omnipresent, always-available mapping was likely to change people’s habits and lives. And before any of this, he had added to world knowledge with his explanation of “Boiled Frog” science. As he laid out in this guest post, careful experiments in 19th-century Germany established that a frog would indeed sit still in a pot of ever-hotter water—but only if its brain had already been removed.

Outside our household, Michael Jones is known, among other things, as one of the guiding forces behind Google Earth and Google Maps. When you see your neighborhood, or your planet, from above on a computer, or follow turn-by-turn directions on your phone, he is one of the people you have to thank.

Among the bright sides in the current pandemic nightmare is the news that this spring Michael received the “Patron’s Medal” from the Royal Geographical Society, in London. I am by nature wary of anything involving the concept of “Royal” (for reasons laid out long ago here), but I make an exception in this case. I am delighted to learn of this overdue recognition for Michael Jones.

As the Society’s announcement put it:

The 2020 Patron’s Medal has been awarded to Michael Jones for his contribution to the development of geospatial information.

Baroness Chalker said: “Michael Jones is a role model for future generations of geographers. From his beginnings as a software engineer, inventing and filing his own patents, through to his role as Google’s Chief Technology Advocate, his inspiring career trajectory is charted by his vision to redefine mapping from static lines and symbols to an interactive geographical web of context and information. It’s hard to overstate the importance that Google Earth and Google Maps has had on the public worldwide and how Michael’s pioneering work has democratised and popularised cartography and spatial awareness. Today we recognise his extraordinary contribution and his continued advocacy for the benefits of geography. He whole heartedly deserves the Society’s highest recognition.”

Michael Jones said: “This recognition is a signal honour for an idea that started in my head and which, through the work of many, resulted in the Google Earth used by billions of people around the world. On behalf of colleagues who laboured to make this dream of Earth and Maps a reality, and in full credit to the inspiring attainments of all who have come before us in the quest to better understand the Earth, I can only say that the ‘Earth-in-your-hand’ idea has never had a greater friend than the Royal Geographical Society, to whom we humbly offer our gratitude.”

As a fellow Yank, I will razz Michael for writing “signal honour”—but it couldn’t be more deserved, with the British u or without. Congratulations. And you can read more about his story and outlook in this interview.